Thoth is something entirely new that the designer of the excellent HOPLITEScomputer card version of GMT's Great Battles of History has come up with.  His name is Gottardo Zancani but prefers the sobriquet ZAK.  Zak is Italiano, and spends too much time being awake (in my US EST time zone) working on projects he does for nothing but satisfaction.  An impressive fellow.  This page is dedicated to supporting Thoth in all shapes and forms, by posting new card deck projects created by gamers, players' own Thoth sites, or more information as it becomes available from Zak.

Thoth came about from some innocent commentary on the CONSIMWORLD Discussion board, in the computer games section.  Someone (who shall remain nameless) mused that Hoplites would make a great basis for a software engine that could have custom  card decks in it for use with PBeM.  Zak rapidly picked up that ball and ran with it.  The results are the new Thoth engine.  Thoth is still in development and Zak actively seeks constructive feedback via email.. so go to the site, download it, and put the program through its paces.

I only have a link to Zak's page now, but hope to have a deck made sometime in the months to come.  Click on the Thoth Splash page to see Thoth at work. 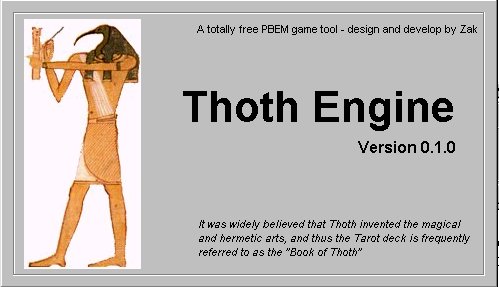