OGRE ON THE MOON

OGRES on the moon?  Preposterous!  How would they get there?  OGREs can't fly!

The following is a beer and pretzels variant for the Steve Jackson Games publication OGRE/GEV.  This variant does not suppose that the milieu created during the OGRE/GEV timeline (as written by SJG) possessed a form of space flight robust enough to carry an object as large as an OGRE into orbit; such an idea would be patently absurd.  However, the idea of carrying the fight between the Combine and Pan-Europa to our nearest satellite is not totally unrealistic.  Human beings have barely scratched the surface of lunar exploration... who knows what remains to be discovered hidden underneath the lunar dust.  Alien Artifacts? Ancient Technology?  Rare minerals...?  Certainly something worth fighting for.

I've been picturing a variant for OGRE/GEV on the moon for a while-- after all, space travel isn't prohibited in the SJ timeline per se, it would just be impossible/too expensive to boost all these lovely weapons up into space... and I doubt mankind would ever make a rocket big enough to send an OGRE into space, or even a Superheavy tank.

That doesn't preclude making the stuff up there, however. If you posit that a system of bases and factories are set up by both the Combine and Pan-Europa, the possibilities open up for a verrry interesting environment for new battles in the OGRE/GEV system.

It's pretty much in my head at the moment, but here's what I've thought up so far:

All MP costs are the same as "Clear" on Earth, except for the following:

Craters: Treat as SWAMP terrain in GEV-- i.e., 2MPS to enter, chance of being disabled, and defense doubled.

Cliffs: Changes in Elevation Cost an additional 1MP for every level, LOS is blocked by elevations, LOS blocked in the hex NEXT to an elevation change if fired on from above.

Railways: All railways are considered to be UNDERGROUND on Luna. Therefore, they cannot be severed by fire combat. Trains move by the same rules as they do in GEV. Railways must connect structures together or extend offmap.

Structures: Moonbases are a new structure. They can hold up to 5 regular INFs or 3 Space Marines. Defense of 2, Cost 6. Required for use with factories.  Alpha, Beta and Gamma are Moonbases on the map I have made (more on this later).

Space Marine INFs: Like regular INF, but can move/fight on the Lunar surface. Cost 5 per squad (use the Regular Marine Counter)

Moon Buggy (need to make a new counter): Attack 2 Defense 2 Move 3/2, like a GEV. Highly agile civilian utility vehicle for movement of maintenance crews on the Lunar Surface (hastily converted to military use). Cost 4 holds up to 2 squads.  Passenger INF types can add their firepower to the Attack (these are basically large dune buggies, very little armor to obstruct fire).

Landers (need to make a new counter): Attack 2 Defense 3 Move (special) Cost 10. Landers are a specialized unit for the transportation of smaller units (usually reinforcements) Reinforcements are recorded off map on a piece of paper. They can LAND anywhere on the map during the movement phase. To LOAD/UNLOAD, the Lander must stay in place the subsequent turn while the loading units move into or out of the adjoining hex. The Lander BOOSTS into low orbit at the end of the turn and may not reappear on the map for another 2 turns. Note that landers hop from point to point on the moon itself, not back to Earth!  Landers can hold 1 SHVY, 2 HVY, 4 LTNK, 2 MSL, 1 MHWZ, 6 Space Marine INFs

Hovertrucks and ALL GEV style vehicles are prohibited. There's no air for them to ride on.

Structures as per Shockwave. Use Admin buildings and Reactor Domes for Factories, a particular target for scenarios.

Lasers and Laser Towers are allowed (encouraged, even, in a vacumn atmosphere)

As noted, Craters are treated as SWAMPS in GEV/Shockwave.

Everything costs quite a bit on the Moon, the assumption being that every combat unit there was built there, with limited resources. Therefore, OGREs are limited to Marks I and II. All other units cost an additonal buy point.

all TNK class vehicles perform as they do on Earth.

Missiles are another story. Every missile, with the exception of Cruise missiles, must perform a stability check when attacking by rolling 1d6. If the player rolls a 6, the missile flys off into the atmosphere and is lost. This roll applies to both MSL tanks and the missiles that come with OGREs.

Howitzer rounds are assumed to be rocket assisted, but guidance is a key factor in a near weightless vacumn. Therefore, every Howitzer attack must make a target acquisition roll (another 1d6) before attacking. If the target is acquired (1-4) the attack is as normal. If the target is lost (5,6), the attack may not be committed.


UNIT COUNTERS FOR OGRELUNA (and others)
A while back, a very talented young artist nicknamed "Cisco" did some variant Lunar counters for OGRELuna. When his site went down, I thought all was lost. However, with the help of Web-Archive, I have recovered some of them, including the Lunar units. So here are (some of) Cisco's old Variant art counters!
These are all BMP files.

OGRE_BandW_INFTRY_Front.bmp (black and white infantry: front)
That's all I have so far... what do you think? I'd like to dwell a little longer on Lasers on the moon, and the effects of increased radiation and extreme low gravity.

Would Overruns still be possible? What about spillover fire in a vacumn?

Your ideas are solicited...  hotspur@rocktemail.com

I've put a sample OGRE/GEV map on the lunar surface on the site.  The three structures are Moonbases Alpha Beta and Gamma.  The dark line connecting them is an underground rail line. 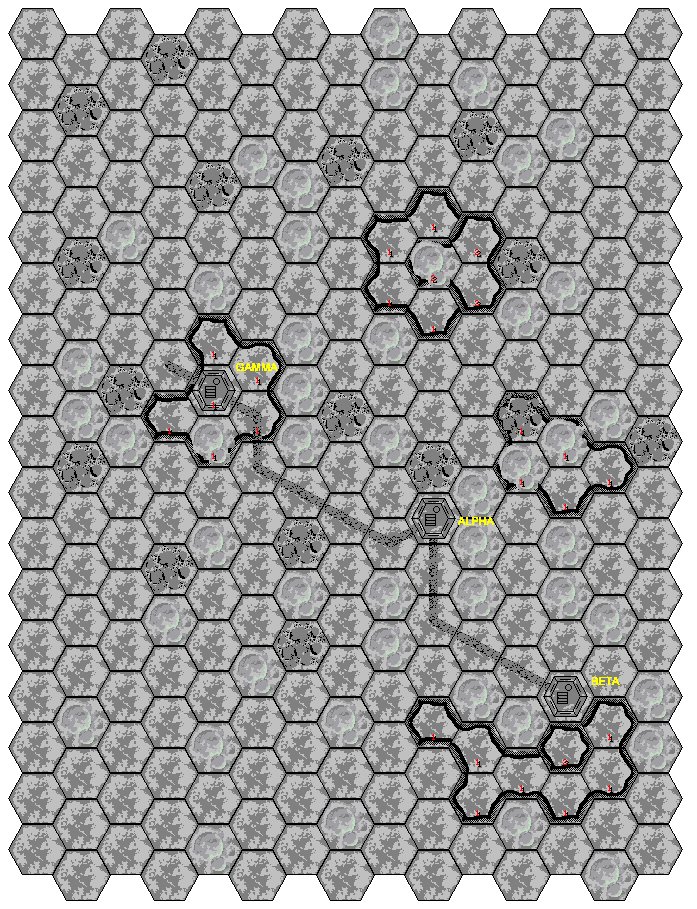 I've used this in conjunction with the new Cyberboard gameboxes (Thanks for the permission Steve), and the results are a real hoot... I just finished soloing my "Battle of Sirtis Crater" scenario with a horrendous defeat of the Combine Crater Raiders!

PBeM Resources for OGRE (official) (VMAP, 2 Different Cyberboard sets, on the Game Aids Page)
The Lunar Map above was created with the excellent freeware product Battletech Map Editor.  A fantastic utility for creating your own scratchbuilt OGRE/GEV maps!