This is a fun little game of Goblin Raids on a Feudal country put out by Dwarfstar in the early 80s.  The Dwarfstar line was gorgeous... Full color in an era when only the few (expensive) boxed game publishers used full color counters and multicolor maps-- and Dwarfstar games were 8.95 or less!

The game is a simulation of goblin raids and human (Feudal) response to them.  Play the part of the Goblin King or the local Count.  There are two scenarios, Raid and Campaign.

GOBLINS is designed by Howard Barasch
Copyright 1982 Dwarfstar/Heritage and its inheiritors.

Do not use or download this gamebox without a legitmate (paper) copy of the game. 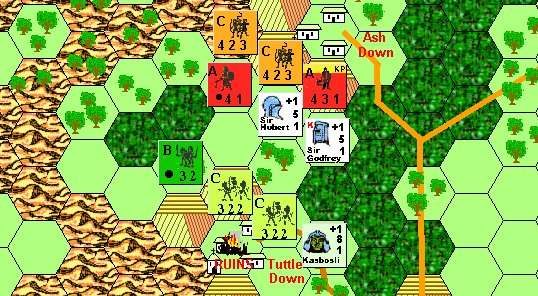 As you can see, the original Goblins game is very colorful.  In the graphic above, Sir Hubert and Sir Godfrey have a line of jury rigged A and C level militia protecting As Down against Kasbosli's raiding force of B and C goblins.   Unfortunately, they were too late to save Tuttle Down.

I had to devise a means of bringing pieces into the game randomly.   I did this through the use of a Deployment Chart (which doesn't come with the paper game).  Basically, the pieces are placed face down in a random pile in relevant boxes during the scenario creation phase.  The player pulls from the piles randomly as the game progresses. 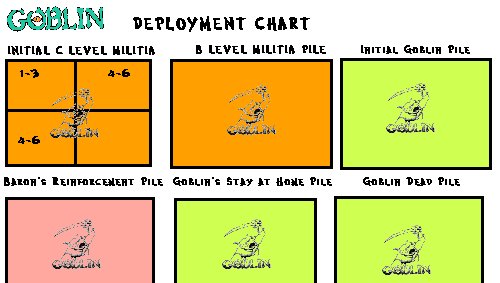 The grid on the initial C level militia is something I may put into gamebox 1.1... a random grid in the box itself that forces you to roll for a location within the box to pull counters from. 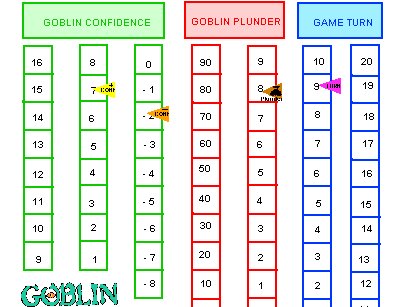 The status sheet is merely an electronic version of the one that comes with the game.  Use the marker key to figure out what goes where.

HOW TO GET THE FILES

Here is the Goblins 1.0  file.   It contains the gamebox and a scenario setup for "Raid".